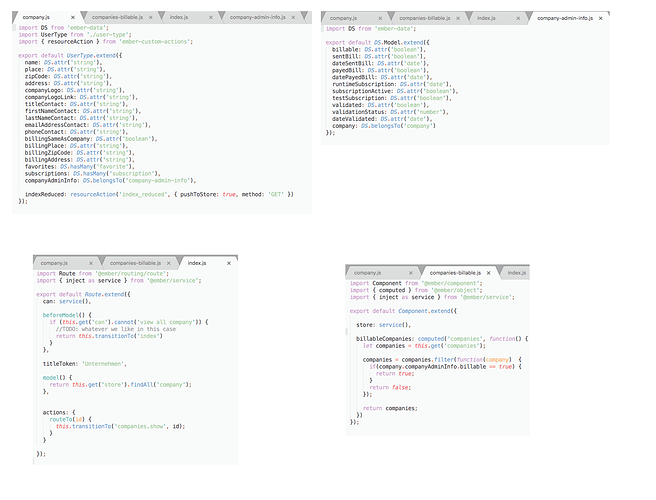 Now I have a template where I want to see all companies but filter them before by attributes of companyAdminInfo e.g. company.companyAdminInfo.billable == true.

This is the route which defines /companies (it’s in the picture above, I can only upload one picture)

I’ve tried different soultions like changing the route or the filter statement but nothing works. I thank you in advance for your help.

what happens if you change your computed property to just:

My guess is that your CP isn’t set up to observe the right paths for changes, and also your relationship is async so you’re dealing with proxies which may not have resolved the first time it is computed

Complicated answer… if your backend supports sideloading, it’s often preferable to load relationships along with primary records, in fact many have discussed making ember data relationships sync by default, meaning you MUST sideload related records. If not that then loading relationships in routes is a good choice because the routing system is built to resolve async state before anything is rendered. But sometimes it’s preferable to load async data in components in which case I personally would always reach for ember-concurrency, it helps you replace what the ember routes are responsible for (error, loading, cancellation, etc).