Passing attributes into a #with helper

From my understanding of the #with helper it will return an html formatted string by default as div element. Below is an example of some code in which I need to include 2 custom html data-attributes to the containing div that the component will be wrapped in. Does the #with helper allow for this type of functionality? 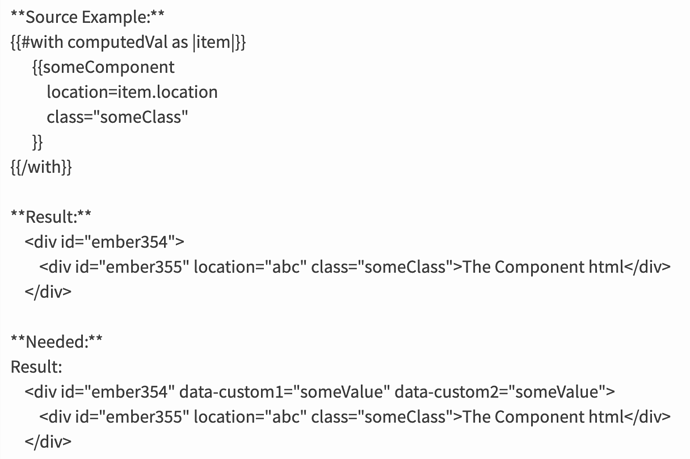 The with helper doesn’t render anything. All it does is define a name (item in your example) for local use. These two are almost exactly equivalent:

(The “almost” is because the with helper doesn’t render its block when computedVal is falsy. This is generally considered a confusing footgun, and the newer let helper exists to avoid this issue.)

If you’re seeing an extra div in your output, it’s not because of the with helper. It’s probably because you’re inside an Ember Component and the component itself always gets a wrapping element. Your options are:

Awesome! Thank you for the reply & great explanations! You were correct I was in another component & I didn’t realize it. New to Ember & still wrapping my head around it. The solve was using the Components API to set attributeBindings and then passing those in with the Components usage in the hbs file.